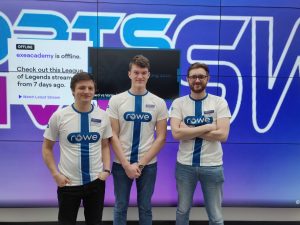 There are 10 seconds left on the clock – the score is 1-1. We’re playing Rocket League in the final of the inaugural Tech South West Esports Festival. Glory is within our grasp. A member of the opposing team dribbles the ball towards our goal, flicks it towards the top corner. I jump up and deflect it harmlessly to the corner of the pitch. Tristan drives the ball powerfully up the wing and delivers a dangerous cross. Sam makes a late dash into the box, rises to meet the ball and… we’ve done it! The RoweBots are champions!

OK, that’s not exactly what happened. We got knocked out in the group stage, winning two games and losing the other two, but it’s fun to imagine.

On 24th February 2022 Rowe IT competed against 15 other organisations from around the South West in a Rocket League tournament. The event was held at the new Digital and Data Centre at Exeter College, home to the Exeter College Esports Academy. The day was a resounding success. A team made up of college staff and students came together to put on a very ambitious and complex event – the setup involved a TV studio, 32 top-of-the-range gaming PCs, streaming software, private lobbies and more. The team would be forgiven a few hitches with so many moving parts, but even the late discovery that the studio was a Faraday cage didn’t slow them down.

In preparation for the tournament, my fellow RoweBots and I had regular lunchtime gaming sessions to work on our tactics and communication. We even had custom football jerseys made – “All the gear and no idea” springs to mind. Although we walked away without a trophy, it was a great opportunity to bond with my colleagues through a shared interest in gaming. Games can be a powerful tool for improving teamwork, decision-making and problem solving.

When the matches were over and prizes dished out, the teams headed over to a nearby restaurant for burgers and drinks. Here I was reminded of the value of socialising with peers, sharing ideas and generally being outside of the remote working “bubble” that so many of us have lived in for the past two years.

Our congratulations go to the Rocketmakers for their deserved victory. With talks of running the tournament next year, alongside similar events around the South West, I’m sure they’ll have an opportunity to defend their title in the future.

To paraphrase another famous android, “we’ll be back”.

The Developer of the Future – Machine Learning