The world of software engineering always seems to surprise us with new technologies or workflows that can cause a need for engineers across all levels to feel pressure to keep up-to-date constantly. Whether it be a code language that has existed for a long time or the new cutting-edge framework, it’s a juggle to decide on what should be used whilst also being able to do the work. From that, along with feeling overwhelmed by these situations, engineers can struggle with feeling like an “Actual, Real, Engineer”™. This feeling can be associated with what has been coined as “Imposter Syndrome”. In a survey conducted by TeamBlind, it was reported that 58% of tech employees considered themselves to have experienced Imposter Syndrome. But why? Apart from what was noted in our introduction, what could make over half of employees think that they are – effectively – frauds, and don’t belong doing what they have been employed to do?

Below are some of the main reasons Imposter Syndrome could occur.

If you come from a different background, such as using a coding bootcamp (something that is more commonly undertaken in the US) or self-learning, rather than the more traditional approach of gaining a university degree. This can lead to thoughts of not being on the same level as peers that have “proper” computer science training. Additionally, coming across concepts and terms that everyone else seems to understand can further this mindset.

Comparing with your peers

When you see everyone hard at work, opening pull requests with “perfect”, well-structured code, and everything just goes smoothly, it can be difficult – especially on the harder days when things just don’t go right. Issues being raised during your own pull requests can certainly reinforce this feeling, as helpful and well-intended they are in the process.

Sometimes the comparisons don’t stop at the workplace, David Walsh’s post on Imposter Syndrome pointed to this by saying – “Our competition isn’t the next local guy — web development is a profession where our colleagues and competition are anyone with a computer and internet connection, all around the world

Staying relevant in the industry

Online, there is always the newest approach, the newest tech stack, the newest library, all solving the same problem, in many different ways. Keeping up with all of it and bringing it to attention in the workplace, especially at the right time, can be daunting and feel nearly impossible.

How can it be identified?

We’ve pointed out that being around your peers who “just do everything right” (hint: they probably don’t) can be one of the things that encourages Imposter Syndrome. This feeling can be made worse when you think that you somehow luckily fell into the position you are in and that you don’t belong here whatsoever and after so many missteps, your employers will find out and then that’s the end of it. See how that situation snowballed? Despite being good enough to gain a degree, gain an interview, impress enough to get the job, it’s just a trick? Odds are, no that’s not the case at all. 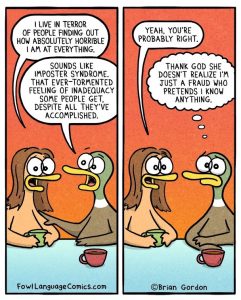 Like the above, you just can’t be capable of writing this code, building this feature or discussing this possible solution, as everyone is far smarter than you, knows more and your opinion just doesn’t matter (hint: it does). If your contributions aren’t acknowledged – intentionally or not, it can have a negative impact on the thought process when being required to contribute next time.

Inability to ask for help

There is nothing worse than being stuck with a problem and feeling like you have asked for help one too many times already…. you shouldn’t need hand holding through everything, right? How frustrating it must be to be constantly disrupted during your workday to once again help with something that turns out to be effectively minor. There’s certainly a fine line here between asking for assistance on a problem straightaway and spending time getting to a solution by yourself. Through experience, getting to show what you have done or what you are attempting to do, makes it a lot easier to approach for help, as you have shown that you aren’t just putting your hands up the moment you need to go outside of a comfort zone.

From the outside perspective it could be tricky to identify when someone is experiencing this. In fact, opening a means of communication is the best way to see when this is occurring. This could be from either side; either the person feeling it could speak to a senior developer, or their line manager, about how they have been feeling, or the company could pre-empt this type of mindset upfront and make that path of communication easier to start.

How can it be prevented or helped?

Making note of your successes can help steer away from these feelings. One idea would be to create a collection of positive client feedback, statistics or screenshots of things that have gone well. Then, when this mindset starts to begin, there is something in place to remind you that, yes, you are capable of this.

Keep in touch with your manager

Being able to move away from the mindset of “being a fraud” can be expedited by regular 1-to-1s to allow feedback from your peers and senior developers. Knowing where you stand – whether it be good or bad – is massively helpful when it comes to resolving the mindset of not being good enough. As stated earlier, having a 2-way conversation about this is also beneficial, as it allows the feeling of not belonging to be confronted. Having goals or deliverables set can help by showing progression and providing focus on growing/improving your skillset.

On top of setting goals/deliverables to be met in 1-to-1s, it is a great idea to plan your career. This can aid with having a roadmap to where you want to head and can alleviate some of the feelings regarding staying relevant.

Imagine this hypothetical…Maybe you don’t need to learn something massively complicated yet, instead, maybe NewLibrary would be more beneficial at the minute – it’s used in other company projects, so maybe that’s a good start. This MassivelyComplicated thing can wait and be decided on later, after all, it’s only come to your attention because there’s been some chat on your Twitter & LinkedIn feeds. Trying to learn everything all at once will never work and can only exasperate the feelings of not being good enough.

There was a great thread on Twitter recently about tips to battle Imposter Syndrome that is worth delving into, with a lot of replies being useful.

There is also a conversation between the CMO and the Head of Inclusion at Netflix regarding their thoughts on Imposter Syndrome and authenticity at work.