Transgender Day Of Visibility is an annual event that takes place on the 31 March that aims to raise awareness of the discrimination faced by transgender people but also to celebrate the contributions they have made to society. 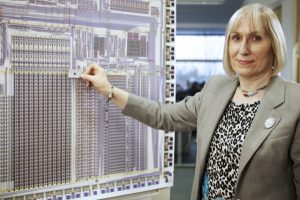 One transwoman that was instrumental in shaping the frontiers of technology for school children in the 1980s was Sophie Wilson.

During a break from studying Computer Science in 1975, she designed a small computer based on the 6502 processor.  A few years later, after joining Acorn Computers, this prototype would form the basis of first of a long line of home computers offered by Acorn. It was called the Acorn Atom by the company.

In the early 1980s, the BBC started the computer literacy project that was aimed at educating children. To support the training material the BBC required a low-cost rugged computer that was easy to use and had the possibility of expansion as required.

The Acorn Proton was adopted by the BBC and renamed as the BBC Micro which most people that were at school in the 80s will easily recognise. Sophie went on to lead the BBC Micro project for the next 15 years whilst working on other Acorn projects.

Acorn set their sights on the business market and wanted to offer a business computer that was at least 10 times faster than the existing BBC Micro. Competitor’s products at that time were very expensive with a large number of supporting components in order to operate satisfactorily. The company experimented with several different processor technologies but found they all performed roughly the same with about 4Mhz clock speed.

Around the same time papers published by the University of California, Berkeley suggested that reduced instruction computers (RISC) set could operate as quickly as many of the more complex processors on the market. This information together with the knowledge that designing their own processor was actually feasible led to the formation of Acorn RISC Machines which later became known as Advanced RISC Machines when it teamed up with Apple.

Sophie developed a simulation for the processor using a BBC Micro which enabled her to test and develop an instruction set for the initial ARM core. Using this initial simulation she was able to approach the CEO of Acorn to request to assemble a team to start development on the new design in October 1983.  The ARM technology leading from this work went on to be widely adopted and used by approximately 95% of the smartphones in use by 2012.

Sophie Wilson is one of many transgender people that have made a valuable contribution to technology. Another example being Lynn Conway who was also an early pioneer in the same field but was fired by IBM when they found out she was transitioning. 52 years later IBM published a formal apology for the way that they had treated her.  Transgender people have always existed worldwide from the twin-spirited people of the indigenous North Americans to the Hijra of south Asia. It is only recently that transgender people have started to feel safe to come out of the shadows.